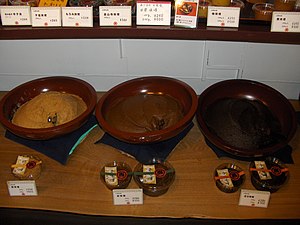 Miso (味噌 or みそ) is a thick or solid paste. It is a traditional Japanese seasoning.

Miso is similar to the Korean doenjang. It is made by fermenting soy beans with sea salt or salt and kōji. Kōji is the product of fermenting rice, barley, or soybeans with a mold culture, Kōji-kin (Aspergillus oryzae). Often, grains such as barley or rice, and sometimes other ingredients, are added. Miso is high in protein and rich in vitamins and minerals. Miso tastes salty and, depending on the grains used and fermentation time, may also be sweet. Miso is used to make miso soup.

Miso first came to Japan from China or the Korean peninsula. Ancient Chinese jan (醤) is the origin of miso. Jan is an ancient fermented seasoning. According to classical scholars, jan was called hishio or kuki in the Edo era. In China, jan was written about in the Shurai.

Miso existed in the Jomon era in Japan. Jan is the Japanese original seasoning. In the Nara era, jan was found in Nishi city, Heiankyo. Miso was used for seasoning porridge made of rice and vegetables. In the Sengoku period, Miso was important to preserved food.

Many Japanese used to make miso in their own homes. This was called Temae-miso. In the Muromachi era, it was used as a food preservative and as a seasoning. Miso was an important source of nutrients for soldiers. In the Edo era, industrial mass production method of miso began. Temae-miso became less common.[2] "Temae-miso" nowadays also used when a person is proud of something.

There are many different flavors of miso. It depends on regions. Shiromiso (白味噌) is popular in the western Kansai region, especially in Kyoto. Akamiso is popular in the eastern Kantō region or northern region. Shinshumiso[3] (信州味噌) is generally popular after the second world war, because it is mass produced in factories and sold in supermarkets in over Japan.[4][5]