Mercury(I) chloride, also known as calomel and mercurous chloride, is a chemical compound. Its chemical formula is Hg2Cl2. It has mercury and chloride ions in it. The mercury is in its +1 oxidation state.

It is a white to pale yellow crystalline solid. It is toxic, but not as toxic as mercury(II) chloride because it does not dissolve in water. It turns back into mercury and mercury(II) chloride when reacted with ammonia or exposed to ultraviolet light. The black color that came from the reaction with ammonia gave its name "calomel" (beautiful black). It is a weak reducing agent. It is the most common mercury(I) compound. 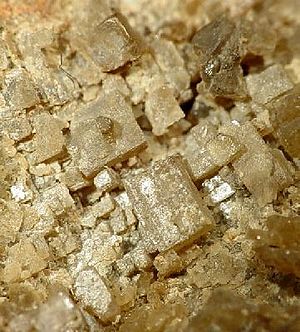 Calomel as a mineral

Calomel is sometimes found as a mineral, but it is quite rare.

It is used in electrochemistry as a reference electrode. Reference electrodes are used to find the electrode potentials (ability to be oxidized and reduced) of other chemical substances. Since it decomposes when light is shined on it, it is used to see how many photons are in a light beam. It was used as medicine in the past, although it was toxic.