Midway Atoll was the site of a famous battle in World War II, the Battle of Midway. The United States of America took control of the atoll in the 19th century when nobody lived there. 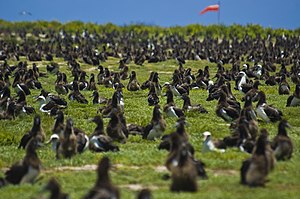 Midway Atoll is now home to 67-70% of the world's Laysan Albatross population, and 34-39% of the global Black-footed Albatross.

While Midway supports nearly three million birds, each seabird species has carved out a specific site on the atoll in which to nest. Seventeen different species of seabird can be found, the rarest of which is the Short-tailed Albatross, otherwise known as the “Golden Gooney.” Fewer than 2,200 are believed to exist due to excessive feather hunting in the late nineteenth century.

Over 250 different species of looli marine life are found in the 300,000 acres (120,000 ha) of lagoon and surrounding waters. The critically endangered Hawaiian monk seals raise their pups on the beaches. Monk seals are benthic foragers and rely on the Midway Atoll’s reef fish, squid, octopus and crustaceans. Green sea turtles, another threatened species, occasionally nest on the island. The first was found in 2006 on Spitsy Rinaia Island and another in 2007 on Sand Island. A resident pod of 300 spinner dolphins live in the lagoons and nearshore waters.