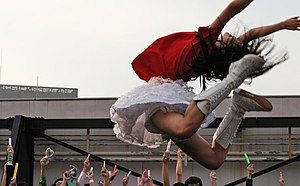 Momoclo's songs are "hyperactive J-pop numbers".[3] Their live performances are heavily choreographed and acrobatic.[4] The group is known for their chaotic energy that is similar to that of punk bands.[5] The response from the audience is also enthusiastic.[6] Because of the hard dances, the girls' voices are not very stable. Nevertheless, they never lipsynch on stage.[7][8] Overall, the group and its music are progressive and forward-thinking.[3]

The group has worked with many famous songwriters and musicians, belonging to different genres of music, from pop to punk and heavy metal.[5] For example, Marty Friedman played the guitar for "Mōretsu Uchū Kōkyōkyoku Dai 7 Gakushō «Mugen no Ai»" (猛烈宇宙交響曲・第七楽章「無限の愛」?), one of the singles, and also appeared on the group's concert.

On stage, the members can be easily found by the colors of their clothes.

There were some other members before releasing the debut CD:

The group formed in the spring of 2008 and officially debuted as a six-member unit a year later. It was originally named "Momoiro Clover", which means "Pink Clover". The name was chosen to show that the band was composed of innocent girls who wanted to bring happiness to people.[10][11][12][13]

In 2011, the group faced a crisis because subleader Akari Hayami suddenly quit. Then, the management added the letter "Z" to the name. In Japan, "Z" is a symbol of evolution.[14][15]

The group is nicknamed "Weekend Heroines" (週末ヒロイン, Shūmatsu Hiroin?), because most of its members are students and the group is active mainly on weekends.[16][17]

The group gives a special emphasis to closeness to the fans and its slogan is "Idols you can meet right now" (いま、会えるアイドル, Ima, aeru aidoru?). They used to perform on park walkways for passers-by. They also gave free concerts in electronics stores and sold CDs by themselves. Though the group made it big, their deep appreciation of the fans can be seen at their live concerts and events, when they make deep and long ojigi, a bow to say thanks.[18]