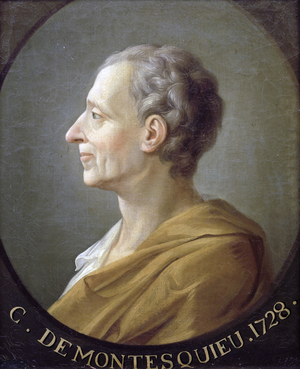 Charles-Louis de Secondat, Baron de La Brède et de Montesquieu. Painting of 1728. It is now in a museum in Versailles

Charles-Louis de Secondat, Baron de La Brède et de Montesquieu (January 18, 1689 – February 10, 1755), was commonly known as Montesquieu. He was a French political thinker. He lived during the Enlightenment, and is famous for his theory of the separation of powers in government. Many constitutions all over the world use it. He helped make the terms "feudalism" and "Byzantine Empire" popular.

Montesquieu said that there are two types of powers in government: the sovereign and the administrative. The administrative powers were the legislative, the executive, and the judiciary. These powers should be divided up so that each power would have power over the other. This was radical because it was very different from the three Estates structure of the French Monarchy. These were the aristocracy, clergy, and third estate from the estates. He also described three main forms of government. These were:

Montesquieu believed that the best form of government was divided into three branches. Montesquieu's ideas are important because they ended the feudalistic structure. They also helped inspire the constitution of many countries, including the United States.

Some of Montesquieu's ideas are still controversial. He believed that women could be leaders in government. But he thought women could not lead a family. He supported a hereditary aristocracy and primogeniture. Hereditary means that the title passes from the parents to the children. His views have also been abused by modern revisionists. For example, Montesquieu was an opponent of slavery. Nevertheless, supporters of slavery have claimed he supported it.[source?]

Montesquieu describes an unusual idea in his essays The Spirit of the Laws and Persian Letters. This idea is the climate theory. It says that climate, the weather of a place, influences the nature of man and his society. Montesquieu thought that some climates were better than others. He believed the mild climate of France is the best. He believed people from hot countries are "too hot-tempered". People in in cold, northern countries are "icy" or "stiff." The climate in middle Europe therefore breeds the best people. (This view is possibly influenced by similar statements in Germania by Tacitus, one of Montesquieu's favourite authors.)

Montesquieu's philosophy that "government should be set up so that no man need be afraid of another" prompted the creators of the Constitution to divide the U.S. government into three separate branches.