Mount Parnassus, also Parnassos, is a mountain of limestone in central Greece. It is north of the Gulf of Corinth. According to Greek mythology, this mountain was sacred to Apollo and the home of the Muses. 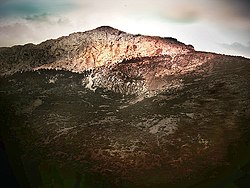 Mount Parnassus was the site of several unrelated minor events in Greek mythology.

Today, the slopes of Mount Parnassus have two ski centres. The Parnassos Ski Centre has two sections, Kellaria and Fterolakka, which together make up the largest ski centre in Greece. A smaller ski centre (only two drag lifts) called Gerontovrahos is across a ridge from Kellaria.

Parnassus is mined for its large supply of bauxite. The bauxite is converted to aluminium oxide and then to aluminium.[2]