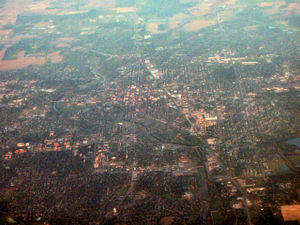 Muncie is a city in Indiana in the United States. It is known as "Middletown USA" because many sociological studies were conducted there because it was said to be the typical American city.[1][2] The population of Muncie in 2011 was 67,430 people.[3]

Muncie is in Delaware County, about 60 miles (97 km) northeast of Indianapolis.[3] The county was named after the Delaware Indians, a native American people, who had moved west from Ohio in the 1770's. They settled along the banks of the White River. One of the settlements was named Muncietown.[3] In 1818 the Delaware signed a treaty with the US Government and moved out of the area to go further west.[3]

Sociologists, Robert S. Lynd and his wife, Helen Merrell Lynd, studied Muncie in the 1920s. They wrote two books about life in Muncie called Middletown: A study in modern American culture,[4] and Middletown in Transition.[5] They wanted to study the typical small American city, which of course can not exist. They wanted to see how life in a city had changed from 1890 to 1925.[6] They were going to study a city they way an anthropologist would study a primitive tribe.[6] They decided to look at six parts of living in a city:[4]:4

They chose Muncie because it shared features with many other small cities.[4]:3 The selection was based on the following:[4]:8

Muncie was chosen from the 143 cities that met the above descriptions. Since then Muncie has been studied by other sociologists looking at life in America.[1] The Ball State University in Muncie runs the Center for Middletown Studies to continue the research.[1]