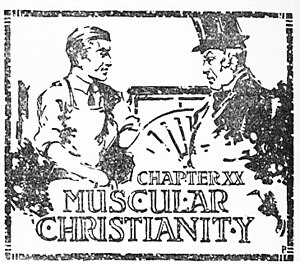 Illustration by F. R. Gruger for the novel Hepsey Burke, by F. N. Westcott, 1915. The Episcopal rector Donald Maxwell (left) gets little pay because of interference from Sylvester Bascom (right), so Maxwell shovels stone to support himself and his wife. Here he confronts Bascom, who accuses him of having no pride.

Muscular Christianity is a term for a movement originating during the Victorian era. It stressed the need for active Christian activism and belief of vigorous masculinity. It is most associated with the English writers Charles Kingsley and Thomas Hughes, and in Canada with Ralph Connor, though the name was bestowed by others. Kingsley and Hughes promoted physical strength and health (at least for men) as well as an active pursuit of Christian ideals in personal life and politics.

Muscular Christianity has continued itself through organisations that combine physical and Christian spiritual development.[1] It is influential within both Catholicism and Protestantism.[2][3]