The Narwhal (Monodon monoceros) is a rarely seen Arctic whale.[1] This social whale is known as the "unicorn of the sea" because the male has a very long tusk. Very little is known about this whale. Narwhal means "corpse whale" in Old Norse.[2]

Large male narwhals can grow to a length of 15 feet, and weigh up to two tons.[3] A female can give birth once every three years, after a pregnancy of 15 months.[3] At birth, the baby narwhal is about five feet long and weighs about 180 pounds.[3]

All narwhals have two teeth in their upper jaw and a tusk. After the first year of a male narwhal's life, its left tooth grows outward, spirally. There are some narwhals that are double-tusked, but they are not as common.[4] This long, single or double tooth projects from its upper jaw and can grow to be 8.75 feet (2.7 meters) long.[5] Tusks are usually twisted in a counterclockwise direction and are hollow inside. The tusk's function is uncertain, perhaps used as a formidable jousting weapon in courtship and dominance rivalry, in getting food, and/or for channeling and amplifying sonar pulses (which they emit).[2][6] The tusk is not used in hunting. Long ago, narwhal sightings probably reinforced (or started) the unicorn legends. In fact, when people found the horn of a dead narwhal washed up on shore, they thought that they had found the horn of a unicorn.[7]

Narwhal can dive deep into the sea to around 800 meters, but can also sometimes dive up to 1,500 meters. This makes them one of the deepest diving sea mammals. 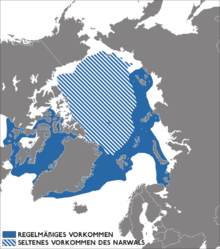 Narwhals live mostly in the solid blue areas of this map, but also live in the striped blue areas.

Narwhals live in the icy waters of the Arctic seas.[5] The Narwhal's thick skin, called blubber, keep them warm in the cold water. They do not go far away from ice. Narwhals live in groups of between 10 and 100. Narwhals are migrating animals who like to move from one place to live in another place for a while. In summer, groups of them move closer to land, where they can sometimes be seen in the estuaries, deep fjords, and bays of Greenland, Northern Canada and as far eastern Russia. In Winter they move back to the icy waters, where they breathe from small holes in the ice.

Narwhals can hunt under ice and like to eat Arctic fish such as the flatfish Greenland halibut, the polar and Arctic cod, shrimp and squid. They suck in their prey when they get close.

Narwhals are both hunted by polar bears and killer whales. The native Inuit people, sometimes called the Eskimos, are still allowed to hunt the Narwhals for their meat and for the tusks. The tusks are sold with or without carving.[8] The annual value received from Narwhal hunts in Hudson Bay is $530,000, of which $370,000 is for meat, $150,000 for tusks, bones and teeth of males, and $10,000 for teeth and bones of females.[9]