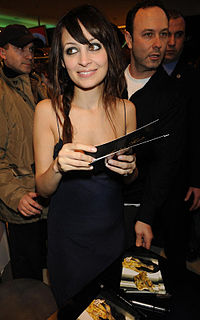 Nicole Camille Richie (born September 21, 1981) is an American socialite, actress, author, and singer. She is the adopted daughter of Lionel Richie, and is best known for being in the reality show The Simple Life. During late 2007 Nicole Richie faced charges of drunk driving and risked a jail sentence similar to Paris Hilton, her co-star and friend in The Simple Life. She has had two children with Joel Madden: Harlow and Sparrow Madden.[1] On February 15, 2010, she announced that she was engaged with Madden.[1] They got married later in 2010.

In 2013, Richie was in the video for the song "Let There Be Love" by Christina Aguilera.[2]

Help Improve This Page: Please contact us to become an approved KidzSearch editor and provide your credentials. Provide feedback on this article in our Nicole Richie Forum