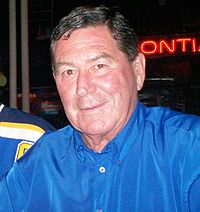 Joseph Jean-Noel Yves Picard (December 25, 1938 – September 6, 2017) was a Canadian ice hockey defenceman. He was the brother of former National Hockey League (NHL) player Roger Picard with whom he briefly played in St Louis, Missouri for one season. He was born in Montreal, Quebec. He played for the Montreal Canadiens, St. Louis Blues and the Atlanta Flames.