The Montreal Canadiens are an ice hockey team in the National Hockey League (NHL). Their nickname is the "Habs" (short for the French "Habitants", early settlers in Quebec from France). They have won the Stanley Cup championship 24 times, more than any other team.

The Canadiens (who use the French spelling of "Canadian") were formed in 1909, as part of the National Hockey Association.

They won their first Stanley Cup in 1916, with star players such as Edouard "Newsy" Lalonde and goaltender Georges Vezina. The Canadiens joined the NHL in 1917; Canadien Joe Malone won the first NHL scoring title (Art Ross Trophy). They won the Cup again in 1924, with players such as Billy Boucher. Howie Morenz was a big star in the early years of the NHL. He was a great skater. Morenz won the Hart Trophy, as the league's top player, three times. Goalie George Hainsworth played at the same time, and along with others such as Aurel Joliat, they won the Stanley Cup in 1930 and 1931. 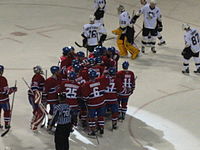 The Canadiens became a very powerful team in the 1950s. Led by legendary center Jean Beliveau, Doug Harvey (who won seven Norris Trophies as best defence, six on Montreal), Bernie "Boom Boom" Geoffrion, Dickie Moore, Jacques Plante (who won seven Vezina Trophies for goalies), and Richard (along with his younger brother, Henri, the "Pocket Rocket"), the team won the Cup in 1953, and five times in a row, 1956 through 1960. They won again in 1965, 1966, 1968, and 1969.