The New York Rangers are an ice hockey team in the National Hockey League (NHL). They play in Madison Square Garden in New York City. The team began in 1926, and has won four Stanley Cup championships. 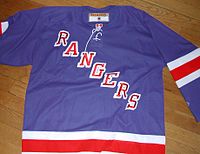 The Rangers were started by a promoter named Tex Rickard. Newspapers began calling the new team "Tex's Rangers", a play on the famous police force known as the Texas Rangers. The team picked up on the nickname, and have been called "Rangers" ever since.

The Rangers did very poorly in the mid-1940s, but improved by 1950, when they lost the Stanley Cup final in overtime of the deciding game seven to the Detroit Red Wings. Buddy O'Connor won the Hart Trophy as most valuable player in 1948, goaltender Chuck Rayner won it in 1950, and Andy Bathgate won it in 1959.

The team did not make the finals again until 1972, when they lost to the Boston Bruins. They were led by players such as Jean Ratelle, Brad Park, Ed Giacomin, and Rod Gilbert. The Rangers made the finals again in 1979, losing to the Montreal Canadians.

There was another team in New York, the Americans. The Americans felt that the Rangers were favoured by Madison Square Garden, and that their team folded in 1942 because of the Rangers. The Americans' coach and general manager, Red Dutton, claimed the Rangers would never win another Stanley Cup as long as he lived. This became known as Dutton's curse.

Red Dutton died in 1987, and his curse came true. Finally, the Rangers improved, winning the President's Cup as regular-season champions in 1992 and 1994. Mark Messier won the Hart Trophy in 1992, and Brian Leetch won two Norris Trophies as best defence. They led the Rangers to the Stanley Cup in 1994, after 54 years of not winning.

Recently, the Rangers have been a poor team, missing the playoffs many years in a row. However, in 2005-06, the team has improved again, much due to the play of star Jaromír Jágr and rookie (first year) goalie Henrik Lundqvist. They reached the Finals in 2014 and lost to the Kings in 5 games.