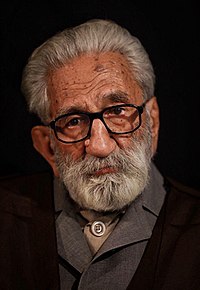 Noor Ali Tabandeh (Persian: نورعلی تابنده, 13 October 1927 – 24 December 2019) also known by the title Majzoub Ali Shah, was the spiritual leader or Qutb of the Ni'matullahi (Sultan Ali Shahi) Gonabadi Order in Iran, which is the largest Sufi order in Iran.[1] He was born in Beydokht, Gonabad, Iran. He was known for his support of human and social rights of Iranians and was under house arrest because of his activism.[2][3][4]