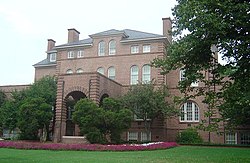 North Carolina State University is a public university in Raleigh, North Carolina. It has about 31,000 students.[1] Many students who go to college here want to learn about math, science, technology, and agriculture, but they can also study other things, too.

The university was started in 1887. It was called the North Carolina College of Agriculture and Mechanic Arts.

Sports teams from North Carolina State University are called the Wolfpack. This is because, in 1921, somebody was angry at the university's football team. He thought that they acted like wolves.[2] They play mostly against other colleges in the Atlantic Coast Conference, which is part of the National Collegiate Athletic Association.[3]