Order of the White Eagle (Poland) 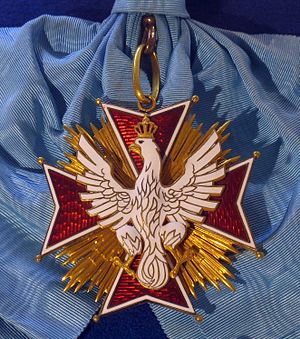 The Order of the White Eagle (Polish: Order Orła Białego) is Poland's highest decoration awarded to both civilians and the military for their service. It was officially created on 1 November 1705 by Augustus II the Strong. It was given to eight of his closest, diplomatic and political supporters.

It is awarded to the most respected Poles and the highest-ranking representatives of foreign countries. The Order of the White Eagle is attached to a blue ribbon hung over the left shoulder to the right side. The star of the Order, once sown, is worn on the left side of the chest.