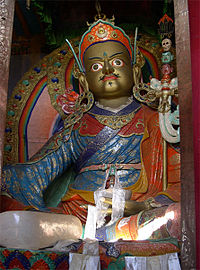 Padmasambhava is the person who brought Buddhism to Tibet in the 8th century. The name is in the Sanskrit language and means "born from a lotus flower". In Bhutan and Tibet he is better known as Guru Rinpoche ("Precious Master") or Lopon Rinpoche,[1] where followers of the Nyingma school regard him as the second Buddha.

The mantra of Padmasambhva is "Om Ah Hum Vajra Guru Padma Siddhi Hum" and is called the Vajra Guru mantra. There is also a prayer called "The Seven Line Prayer" which is devoted to him.