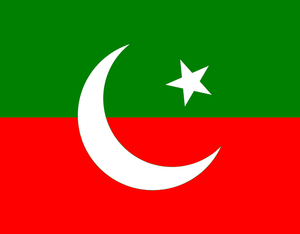 The Pakistan Tehreek-e-Insaf (Urdu: پاکستان تحريک انصاف; Pakistan Movement for Justice) is a political party in Pakistan. PTI was founded by former Pakistani cricket captain and philanthropist Imran Khan (Pakistani cricketer). The party's slogan is "Justice, Humanity and Self Esteem".

The PTI manifesto states "The PTI agenda of resurgence articulates the long neglected aspirations of our people and spells out the vision of a modern Islamic republic that advocates tolerance, moderation and freedom to practice the religion of one’s choice."