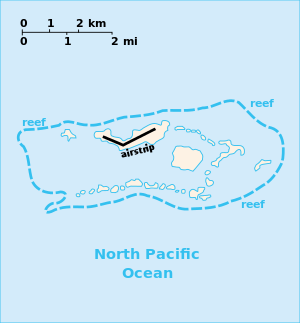 Palmyra Atoll is an island in the North Pacific Ocean. No one lives there, but 4 to 20 people use this island, mainly scientists. It is managed as a nature reserve by the United States. It is known as the Palmyra Atoll National Wildlife Refuge.[1]

In 2005, a team of scientists from around the world started to build a research station on the island. They wanted to gain a deeper understanding of the environment of the island.

Palmyra Atoll was claimed by the Kingdom of Hawaii in 1862, and was taken by the United States in 1898 along with Hawaii. The atoll was not included in the Hawaii Admission Act of 1959, which made Hawaii a state, so it remained a US territory.