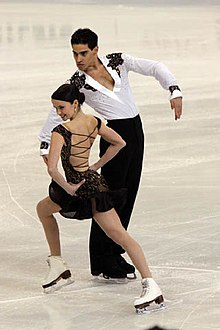 The Paso doble is a dance and music based on the Spanish bullfight.[1] It is the music played at bullfights at the procession of the bullfighters, between stages, and at the end of each session. The dance is based on the way matadors perform in the ring.[2]

The paso doble is one of the five International Latin ballroom dances. It gives a very good contrast in style with the four other dances. Although so Spanish in style and origin, the dance techniques were first developed in Paris. Later, in mid 20th century London, the Latin and American dances took on their present form.

The most famous piece of paso doble music is the España Cañí or Spanish Gypsy Dance. A sample of La Gracia de Dios gives an idea of the rhythm.[4]