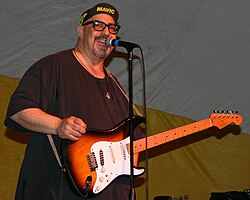 Pat DiNizio (October 12, 1955 – December 12, 2017) was an American rock musician. He was best known as the lead singer, songwriter and guitarist of the band The Smithereens. He formed the band with three original members in 1980 in Carteret, New Jersey. He was born in Scotch Plains, New Jersey, but raised in Carteret.

Help Improve This Page: Please contact us to become an approved KidzSearch editor and provide your credentials. Provide feedback on this article in our Pat DiNizio Forum