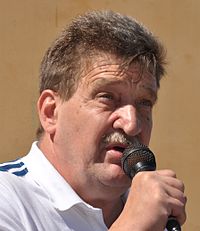 Pertti Johannes Alaja (18 February 1952 – 18 August 2017) was a Finnish footballer. He was born in Helsinki, Finland. He played as a goalkeeper.[1] He played for HJK Helsinki, Haka, Oulun Työväen Palloilijat, Ikast, Edmonton Drillers, Malmö FF and for the Finland national football team.[2]

Alaja was elected as the 15th president of the Football Association of Finland on 14 October 2012, replacing Sauli Niinistö.[3]