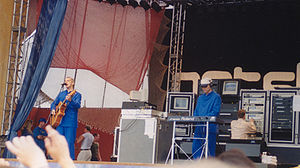 Performing in Turku, Finland in 1997

Pet Shop Boys are a British synthpop duo: Neil Tennant and Chris Lowe. They formed in London in 1981 after they met in an electronics shop. They have sold 50 million records and are the most successful British music duo of all time. They have won three Brit Awards. They have been nominated for seven Grammy Awards. In 1984 their first single "West End Girls" was released. It reached number one in the UK and US.[1]