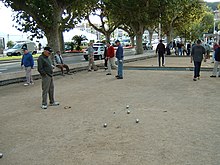 Petanque is a game played in France by many people. It is played on a smooth surface. The game is played between two teams. Each team has three players. At the start of the game, a small ball is thrown. Each player stands in a circle and tries to throw a larger ball so that it lands close to the small ball. The winning team is the team that has the most big balls close to the little ball.