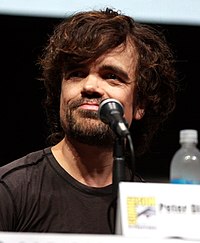 Peter Hayden Dinklage (born June 11, 1969) is an American actor who starred in the Home Box Office television series Game of Thrones. He also starred in other movies, including Elf (2003), Penelope (2006), Death at a Funeral (2010) and Ice Age: Continental Drift (2012). Dinklage was born in Morristown, New Jersey.[1] He was born with achondroplasia, a form of dwarfism. He studied at Bennington College. In 2005, he married Erica Schmidt. They have one daughter. He is a Catholic.[2] He is a vegetarian[3] and a supporter of animal rights.[4]