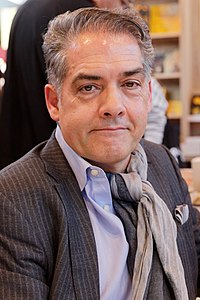 Philip Ballantyne Kerr (22 February 1956 – 23 March 2018) was a British novelist.[1][2][3] He was born in Edinburgh, Scotland. Kerr wrote for The Sunday Times, the Evening Standard, and the New Statesman. He was married to fellow novelist Jane Thynne.

Kerr was known for the Bernie Gunther series of historical thrillers set in Germany and elsewhere during the 1930s, the Second World War and the Cold War. He also wrote children's books under the name P. B. Kerr, including the Children of the Lamp series.