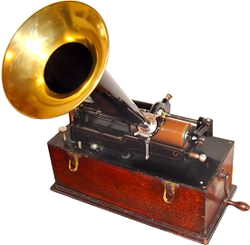 The phonograph is a device for the mechanical recording and reproduction of sound. It was the most common device for playing recorded music from the 1870s through the 1980s. It was invented by Thomas Edison, after other inventors had studied the idea. Early phonographs recorded sound on cylinders, in addition to playing sound. In its later forms, it is also called a gramophone (as a trademark since 1887, as a generic name in the UK since 1910) or, since the 1940s, a record player.

Thomas Edison made his first phonograph with the mouth piece of the early telephone and some tinfoil. He thought he could talk into the mouth piece to make a disk vibrate, as the disk vibrated a needle would put grooves in the tinfoil. When Edison adjusted the machine to play and cranked the lever, he was surprised to hear his voice play back to him. He said his ideas rarely worked the first time. These cylinders could record sound, but due to their cylindrical shape, they could not be copied cheaply with a mold.

The gramophone, invented by Emile Berliner, plays sounds from a flat disk record. The record is placed onto the turntable. The turntable spins the record while a lever with a small needle on the bottom lies between the little grooves in the disk. When the grooves make the needle vibrate, music is played. These machines do not record, but the disks could be copied quickly onto vinyl disks in a factory with a mold, called a master.