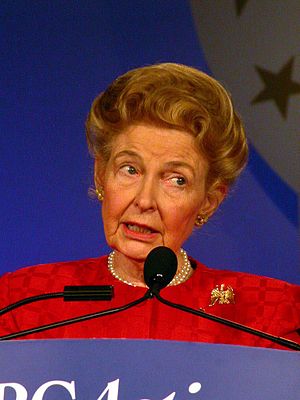 Phyllis Schlafly (August 15, 1924 in St. Louis, Missouri - September 5, 2016 in Ladue, Missouri) was an American conservative. She was a political activist, author, and constutional attorney.

Her best-selling book, A Choice, Not an Echo, was written in 1964. The book was about corruption in the Republican Party and how people with lot of money unfairly influenced elections. She was a big supporter of Barry Goldwater, who was the Republican Party's nominee for president in 1964. Goldwater had beaten Nelson Rockefeller, a more moderate candidate backed by big money. Although Goldwater would lose the 1964 election to Lyndon Johnson, the campaign helped start the modern conservative movement. Starting in 1967, she published her own newspaper, the Phyllis Schlafly Report. When the Equal Rights Amendment was passed by congress, she organized a campaign against it. Schlafly argued that the amendment would not actually help women, often pointing out that it would force women to be drafted. After a long and controversial debate, the amendment was not added to the Constitution. Schlafly is usually considered the main force that stopped it. She is very critical of the feminist movement, saying that "it teaches women to be victims." She helped with Ronald Reagan's campaign for the presidency in 1980. Schlafly remained active in politics until her death.

Schlafly died at the age of 92 in Ladue, Missouri of pancreatic cancer.