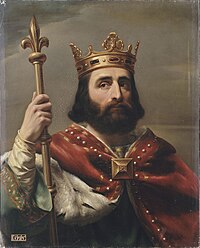 In 740 Pepin married Bertrada of Laon. She was the daughter of Caribert of Laon. They had two sons and a daughter who lived long enough to become adults:

Pepin died at Saint Denis and is buried in the basilica with his wife, Bertrada of Laon. His sons, Charlemagne and Carloman, were each King of half the Kingdom of the Franks after him.