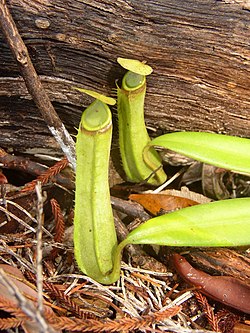 The pitcher plants of Asia, the Nepenthes, grow pitchers from the ends of the leaves 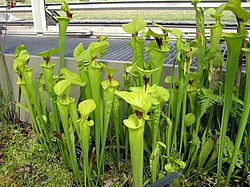 The pitcher plants of America, the Sarracenia, grow pitchers up from the roots

Pitcher of the pitcher plant is actually a modified leaf. The apex of the leaf is the lid.

Pitcher plants catch (get) insects in a cup of liquid. The walls of the cup make nectar (sweet liquid) . The nectar attracts insects. When an insect lands on the wall, it falls down into the liquid. The insect cannot get out of the cup because the walls are smooth and slippery and the walls have hairs pointing down. After the insect is dead, its body rots. Rotting releases (lets loose) the nitrogen from the insect's body. The nitrogen then goes into the liquid and the plant takes in the nitrogen from the liquid.

In a pitcher plant, leaves are modified in container or pitcher like structure with a lid. When an insect lands on the edge of the pitcher, the lid closes, trapping the insect inside. Later, the insect is digested by secretion of the Pitcher plant.