Pool, also known as pocket billiards, is the general term for a family of cue sports. These games are played on a pool table with six holes cut into them called pockets, into which balls are deposited as one of the main goals of play.

Outside the billiards industry, the various games played on these tables are very often called "pool". This is due to an association with the "poolrooms" where gamblers "pooled" together their money to bet on horse races. Because these places often provided billiard tables, the term "pool" became linked to billiards. Though the original "pool" games were played on pocketless carom billiards tables, the name stuck to pocket billiards as it gained in popularity. The traditional view of billiards as a refined and noble pastime did not blend well with the low-class connotations of gambling. Because of this, the billiards industry's attempts to distance itself from the term "pool" beginning in the late 19th century. They were largely unsuccessful.

There are hundreds of pool games. Some of the more well known include eight-ball, nine-ball, straight pool, and one-pocket. The game of snooker is played on a table with pockets but is considered separate from pool. It is governed internationally by the World Professional Billiards and Snooker Association (professional) and the International Billiards and Snooker Federation (amateur). There are also hybrid games combining traits of both pool and carom billiards, such as English billiards, American four-ball billiards, cowboy pool and bottle pool.

As a competitive sport, pool is governed internationally by the World Pool-Billiard Association (WPA), which has national affiliates such as the US Billiard Congress of America (BCA), and which represents pool in the World Confederation of Billiard Sports, which in turn represents all forms of cue sports in the International Olympic Committee. 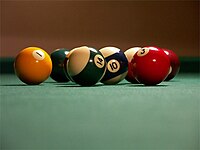