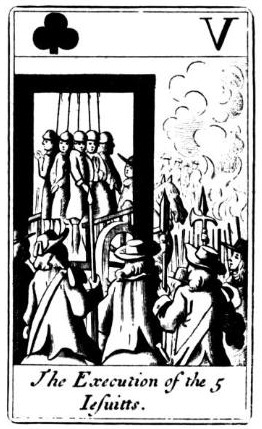 The execution of the five Jesuits

The Popish Plot was a story made up by Titus Oates that caused people to hate the Catholics in England between 1678 and 1681.[1] Oates said that there was a large Catholic conspiracy to kill Charles II. His story led to the execution of at least 15 men and caused the Exclusion Bill Crisis. After a while Oates' complicated story fell apart, and he was arrested and sent to prison for perjury.