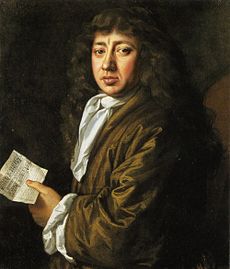 Samuel Pepys may have suffered from PTSD, after the Great Fire of London in 1666.

PTSD is different from traumatic stress, which is less intense and shorter, and combat stress reaction, which happens to soldiers in wartime situations and usually goes away. PTSD has been recognized in the past by different names, like shell shock, traumatic war neurosis, or post-traumatic stress syndrome (PTSS).

Throughout history, there have been many accounts of people experiencing symptoms of what is now called PTSD. One such account describes Samuel Pepys, who witnessed the Great Fire of London in 1666.[1] "Six months after the event, he wrote in his diary that he was unable to sleep at night, because a great fear of fire took him; one night he was unable to fall asleep before two in the morning, because of that fear."

Between 50% and 90% of people in the United States will experience a trauma at least once in their life.[2][3] However, not everyone who experiences a trauma will develop PTSD.  In the US, the prevalence of PTSD - the percentage of people who have the condition - is about 8%.[2]

PTSD is more common among specific groups of people who are more likely to experience a trauma.  These groups include physicians, firefighters, soldiers and people working in emergency medical services. Among these people, the prevalence of PTSD is much higher, reaching over 50%.

The soldier on the left has a look that is called Two Thousand Yard Stare. This look may be a precursor or a symptom of PTSD.

For PTSD to be diagnosed officially, a person has to meet specific criteria, or requirements, and show specific symptoms.  These requirements are listed in the Diagnostic and Statistical Manual-IV-TR (usually called the DSM-IV-TR).  Written by the American Psychiatric Association (APA), the DSM-IV-TR (DSM, 4th Edition, Text Revision) lists all of the mental health conditions that are recognized by the APA, and sets out the official requirements that have to be met for each condition to be diagnosed.

According to the DSM-IV-TR, for PTSD to be diagnosed, a person has to meet the following requirements:

(C) Avoidance/Numbing: The person keeps trying to avoid things which remind him of the trauma, or things which bring up upsetting feelings about what happened.  He might also forget parts of what happened to him, or he might feel numb emotionally (have trouble feeling emotions as strongly as usual).  He might be jumpy, or have trouble with sleeping, concentrating, or feeling angry.

(F) The person's symptoms causes him to have trouble at work, in his relationships, or in some other important area of his life.

Some experts have written that Fabricated Posttraumatic Stress Disorder should be considered when a patient's symptoms are suspicious or unusual.  These experts (specifically, the "American Psychiatric Association" DSM IV manual; expert witnesses such as Eli S. Chesen, M.D.; and the textbook "Comprehensive Textbook of Psychiatry," by Freedman & Kaplan) have suggested that it should raise a "red flag" if a patient claims to be suffering from both PTSD and a Traumatic Brain Injury (TBI) as a result of the same accident.  They suggest that TBI - a physical injury to the brain - causes amnesia, or memory loss, for the event that caused the brain injury.  Without memory of the traumatic event, they reason, a patient probably could not experience certain symptoms of PTSD, like nightmares or flashbacks about the event, because they do not remember what happened.  They conclude that in typical cases, Traumatic Brain Injury "trumps" the diagnosis of PTSD.