Protein before and after folding 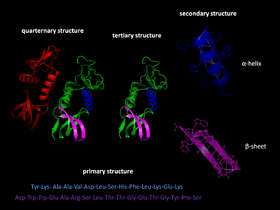 Protein folding is the third stage in the development of protein structure.

The structure of a chaperonin. Chaperonins assist some protein folding.

Protein folding is the process by which a protein gets its functional shape or 'conformation'. It is mainly a self-organising process.[1] Starting from a random coil, polypeptides fold into their characteristic working shape.[2] The structure is held together by hydrogen bonds.

Without its correct three-dimensional structure a protein does not work. However, some parts of proteins may not fold: this is normal.[4]

If proteins do not fold into their native shape, they are inactive and are usually toxic. Several diseases are believed to result from misfolded proteins.[5] Many allergies are caused by the folding of the proteins, for the immune system does not produce antibodies for all possible protein structures.[6]

Chaperonins are large proteins which help the folding of some proteins after synthesis.[7] Chaperones in general were first discovered helping histones and DNA join up to form nucleosomes.[8] Nucleosomes are the builing blocks for chromosomes. It is now clear that this is the way many cell organelles are built up.[9][10]