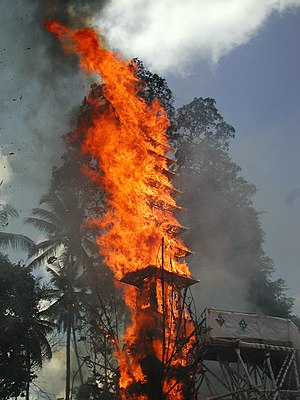 A Hindu funeral pyre in Indonesia

A pyre, also known as a funeral pyre, is a structure used for burning a body. The word pyre comes from the Greek word for fire. Pyres are built outdoors. They are usually made from wood. The body is placed on top of the pyre or under it. Then the pyre is set on fire. Pyres are still used for funerals in some parts of the world. They are also used for other types of ceremonies. In those ceremonies, there is a big fire, but a body is not burned. Historically, pyres have also been used to kill people by burning them alive.

The Hindu, Sikh, and Buddhist religions still use pyres for the cremation of dead people. This form of funeral is thousands of years old.[1][2] However, it is no longer legal in many countries. The ancient Greeks and ancient Romans used funeral pyres. The Vikings also used them. Viking funeral pyres were usually built on boats floating in the sea.[3]

Other uses for pyres

People sometimes use pyres to make a big fire or bonfire but they do not burn a real body. These types of pyres are used for celebrations or to remember a person or a special event. Pyres are often used in Guy Fawkes Night celebrations in the United Kingdom and some Commonwealth countries. In Denmark and Germany people light pyres to celebrate the summer solstice (the longest day of the year). People light pyres in Switzerland to celebrate their National Day.

Farmers sometimes use pyres to destroy the bodies of dead animals. They especially use them when the animals have died of a disease. This helps prevent the spread of the disease to other animals.[3]

In the past, pyres were sometimes used to execute people. The people were burned while they were still alive. Often the person was tied to a stake (a very big stick) on top of the pyre. This type of execution was known as "burning at the stake". Joan of Arc died in this way.