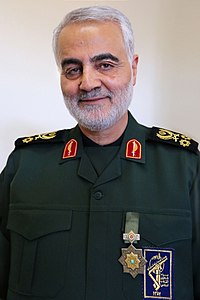 Qasem Soleimani (Persian: قاسم سلیمانی‎; 11 March 1957 – 3 January 2020) was an Iranian major general in the Islamic Revolutionary Guard Corps (IRGC). From 1998 until his death in 2020, he was commander of the IRGC's Quds Force. He was born in Qanat-e Malek, Kerman. He began his military career in the 1980s Iran–Iraq War. He later helped command efforts against the Islamic State of Iraq and the Levant (ISIL) in 2014–15.

On 3 January 2020, Soleimani was killed in an airstrike near Baghdad International Airport in Baghdad, Iraq. The U.S.-ordered airstrike also killed others, including Abu Mahdi al-Muhandis.[1]