The Kaaba is a large cube-shaped building inside the mosque known as al-Masjid al-Haram in Mecca, Saudi Arabia. Muslims believe that the Kaaba was built by the command of God. The Kaaba’s original architecture has remained the same for centuries.

The Kaaba was buried under the sand by the Noah's flood. After a period of time, it was rebuilt by Prophet Abraham and his son Prophet Ishmael.[3][4][5][6]The Kaaba was a place of monotheism for centuries. Then Amr bin Luhayy brought an idol to the Kaaba.[7] After that, the Kaaba became a place of pagan belief.[4][5][8]

The Kaaba began to be managed by Muslims in 630 AD. Prophet Muhammad removed the idols.[4] Also the Kaaba was cleaned with sacred water (Zamzam) under his guidance.[3]

The general architecture of the Kaaba remained the same until 1630 because people wanted to keep the original architecture. Only simple repairs and small decorations were made during this long period of time. In 1630, three walls of the Kaaba were heavily damaged by a storm. Then, it was restored by Murad IV, 17th Sultan of the Ottoman Empire. The Kaaba has remained the same after this renovation.[5]

The Kaaba is the holiest place in Islam.[9] Muslims believe that the Kaaba is the House of God (Baitullah).[4] Prophet Mohammed said[10] the Sacred Mosque (Masjid al-Haram) is one of the three most important mosques on the Earth.[11]

Muslims are required to make a pilgrimage (hajj) once in a lifetime to the Kaaba.[12] As it is the most holy place in Islam all Muslims pray towards this when they perform the five fardh (necessary acts mentioned in the Qur'an) Salat or prayer.[4][3] At the end of Hajj season, there is a holiday called Eid al-Adha (English: Festival of Sacrifice). 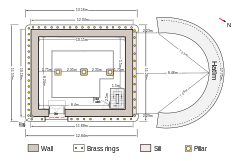 Inside the Kaaba, there are three pillars to support the roof. The floor is made of marble and the ceiling is covered with cloth.[5] Gold and glass decorations are hanging between the pillars.[3][14]

(See the image for each numbered item)

The Kaaba was first covered by Abu Karab As’ad, in 60 BC approximately.[7] The cover was made of valuable materials, as a symbol of his respect for the Kaaba. After that, the Kaaba has been covered with the most valuable materials following the tradition of showing respect.[15]

The covers are produced by a factory every year, the factory was established only to produce the cover in 1927. The cover is replaced every year on the eve of Eid Al-Adha by 160 technicians. 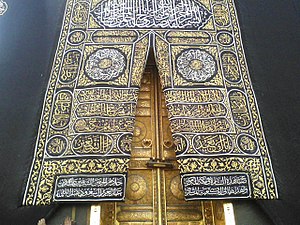 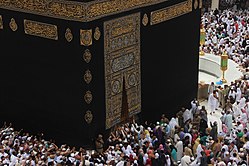