Randall Keith "Randy" Orton[1][2] (born on April 1, 1980) is an American professional wrestler. He is currently signed to the WWE.

Orton broke his collarbone in a Last Man Standing match at the One Night Stand event in 2008 against Triple H, and hurt it again in a motorcycle accident.[9][10]

Randy Orton debuted in a 2002 edition of Smackdown against Hardcore Holly. He won the match by rolling up him. In the WWE Draft he was then drafted to Raw. Randy Orton, along with Triple H, Batista and Ric Flair formed the group Evolution. Randy Orton won the World Heavyweight Title from Chris Benoit at Summerslam 2004, but the night after Randy Orton was kicked out of Evolution. At Unforgiven, he lost the World Heavyweight Title to Triple H in a No Disqualification match. At Wrestlemania 21, he was unsuccessful in defeating the Undertaker.

The next night on Raw, he stated that his match with the Undertaker had made a shoulder injury worse. When sidelined, he appeared on RAW and stated that he could not get drafted due to injury. He was informed by Vince McMahon that he was indeed eligible for the draft. He returned to Smackdown!. He started his feud with the Undertaker again defeating him at Summerslam in a Casket Match. The following 2 months, he was in the Elimination match at Survivor Series, getting the victory for Team Smackdown. At the event The Undertaker appeared from a flaming casket after Randy Orton "killed" him on an episode of Smackdown. The feud was finally finished in a Hell In A Cell match at Armageddon, where the Undertaker won.

After Armageddeon Randy Orton entered thirtieth and last in the Royal Rumble match. He was eliminated by Rey Mysterio who won the match. Randy Orton asked Mysterio to put his title shot on the line in a match at No Way Out. In the weeks before No Way Out Randy Orton made comments about Mysterios late friend, Eddie Guerrero who had recently died in November. Randy won at No Way Out therefore getting him the title shot. General Manager Thedore Long set up a Triple Threat match at Wrestlemania 22 between him, Mysterio and Kurt Angle. Mysterio pinned Angle and won the World Heavyweight Title.

On the July 23rd RAW it was announced that Orton would face Cena in a title match at Summerslam. Orton lost to Cena at Summerslam. The next night on RAW he demanded that the RAW GM William Regal would give him a WWE Title rematch. At No Mercy Mr.McMahon awarded Orton the WWE Title as Cena was injured the previous week. However in the opening match Triple H defeated him for the title.

Later in the night Orton defeated Triple H in a Last Man Standing match to become a 2 time WWE Champion in 1 night. On the October 8th RAW, Shawn Micheals returned and preformed Sweet Chin Music on Orton. The 2 met in a title match at Cyber Sunday. In the match Orton gave Shawn Micheals a low blow and retained his title. At Survivor Series, they met in a rematch and the stipulation was that if Micheals hit Sweet Chin Music he would never get another title shot and if Orton got disqualified he would lose the tile. Orton preformed the RKO on Micheals and pinned him to defend the title.

He defeated Jeff Hardy to again retain the WWE Title at the Royal Rumble. John Cena returned and won the 2008 Royal Rumble. Instead of facing the champ at Wrestlemania Orton faced Cena for the title at No Way Out. Orton intententionally got himself disqualifed thus retained the title. At Wrestlemania 24 Orton faced John Cena and Triple H. He won the match. The next month at Backlash, Orton faced Triple H, John Cena and JBL in a Fatal 4 Way Elimination Match for the title. He was pinned by Triple H. After losing at Judgement Day Orton faced Triple H at One Night Stand and broke his collarbone. 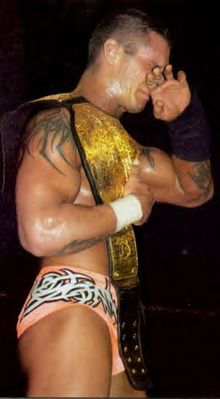 Just before he made his return Orton reinjured himself in a motorcycle accident. At Unforgiven Orton, Cody Rhodes, Ted Dibiase and Manu cost World Heavyweight Champion CM Punk his title in a title match. He made his in ring return by losing to CM Punk by Disqualification when Ted Dibiase interfered. On the December 1st episode of RAW he made an alliance with Cody Rhodes Ted DiBiase and Manu called Legacy He began 2009 off with winning the 2009 Royal Rumble. At the 25th Anniversary of Wrestlemania Orton lost to Triple H in a title match. He punted each member of the McMahon family before beating Triple H in a 6 man tag team match for the title. He intetionally disqualified himself at Judgement Day to retain the WWE Title. At Extreme Rules he was beaten by Batista for the title. The next night on RAW Batista vacated the WWE Title due to an injury and Orton won it in the main event. He challenged John Cena to a title match and the stip was if he won he gets the title and if he loses he must quit RAW for good. He lost to John Cena in a I Quit Match at the Breaking Point pay per view. The next month at Hell In A Cell Orton defeated Cena in a Hell In A Cell match to win the title back. At Bragging Rights Orton and Cena were tied 5-5 in an Ironman match with only few seconds remaining. Suddenly John Cena locked Orton in the STFU and Orton tapped and lost the title.

On the January 11th episode of RAW he won a Triple Threat Match with the help of Rhodes and DiBiase to get a Title shot at the Royal Rumble. At the Royal Rumble Rhodes disqualified Orton by interfering. Orton responded by attacking them. He got disqualified in a rematch. He won a spot in the Elimination Chamber. In that match Rhodes passed DiBiase a pipe and he hit Orton with it and eliminated him. At Wrestlemania XXVI he defeated Rhodes and Dibiase in a Triple Threat Match.

Orton was chosen to face Jack Sagger for the World Heavyweight Title in an Extreme Rules match at the Extreme Rules ppv. He lost. On the special RAW draft show Orton was in a Triple Threat match to determine the #1 contender to John Cenas title and his opponett at Over the Limit. Orton lost when Edge speared him. Orton and Edge fought to a double countout at Over the Limit. Orton was supposed to face Batista for a spot in the fatal 4 way match for the WWE Title at Fatal 4 Way PPV but Batista quit and Orton was automaticlly qualified. The season 1 NXT Rookies interfered in the Fatal 4 Way and cost Orton the match. At the Money In The Bank pay per view he was in the RAW money in the bank match but came up short. On RAW he won a chance to challenge Sheamus for the WWE Title at Summerslam. He lost to Edge on RAW. The next week he beat the Miz on RAW. At Night of Champions he won the WWE Championship after beating Sheamus, Wade Barrett, John Cena, Edge and Chris Jericho in a six pack challenge. At Hell in a Cell he retained the title to Sheamus.