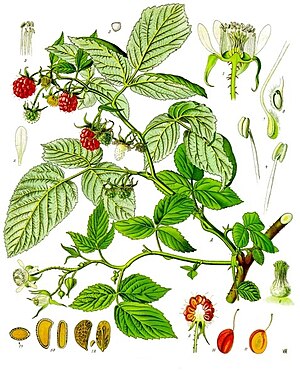 A drawing of Raspberries, dating from the 19th century.

A raspberry is an aggregate fruit, meaning it has many parts joined together. It is similar to a blackberry, but the fruit is hollow on the inside. There are many different species of raspberry plants, but only a few of them have fruit that are sold in stores. Leaves of the raspberry plant are also used fresh or dried in herbal teas. The raspberry flower can be a source of nectar for honeybees. Raspberries are a popular fruit in some parts of the world.

A raspberry plant typically grows in fields or in forest clearings where fire or wood-cutting has produced open space. As a cultivated plant in moist temperate regions, it is easy to grow. It has a tendency to spread unless cut back.

The raspberry fruit that are sold in stores come from plants that are hybrids between two species, Rubus idaeus, European red raspberry, and Rubus strigosus, American red raspberry. Fruit from Rubus occidentalis, black raspberry, are sometimes available, and hybrids with purple fruit exist. These three species are in the same subgenus, Rubus subgenus Idaeobatus.

Other raspberry species in Rubus subgenus Idaeobatus include:

Other raspberry species that are not in Rubus subgenus Idaeobatus include: