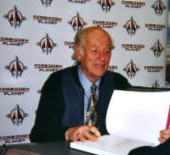 Harryhausen was born on June 29, 1920 in Los Angeles, California to a German family. He was married to Diana Livingstone Bruce from 1963 until his death in 2013. Harryhausen died on May 7, 2013 in his home in London, England from natural causes, aged 92.[2]

Help Improve This Page: Please contact us to become an approved KidzSearch editor and provide your credentials. Provide feedback on this article in our Ray Harryhausen Forum