A razor is a tool, with one or more blades, most commonly used by men for shaving the hair from their face, and by women for shaving hair from their legs and underarms. The earliest razors known are from the Bronze Age. They were made of bronze and had an oval shape. There are different kinds of razors today, including straight razors, which are rarely used, and safety razors and electric razors.

A slightly different type of electric razor is used to trim and cut hair from the head, because hair can be cut much more quickly with electric haircutting razors than with scissors.

Before the 20th century, straight razors were widely used. A straight razor consists of a knife blade, which can be reused. Since this blade is usually very sharp, there is a high risk of cutting oneself with the razor while scraping off the hair. Today, such razors are rarely used any more, except by barbers.

In the late 18th century, French engineer Jean-Jacques Perret invented the safety razor. With this system, the skin is protected, from all but the edge of the blade. This makes cutting much harder. The first such razor was released in 1875 by the Campfe Brothers. In 1901, King Camp Gillette invented the first razor with disposable razor blades. The blades were thrown away after several uses. The number of times a disposable blade can be used depends on beard coarseness and shaving technique, but the average is about one week. The company, Gilette still makes such razors today. They sell the razor relatively cheaply, and make big profits on the razor blades.

For face and body hair 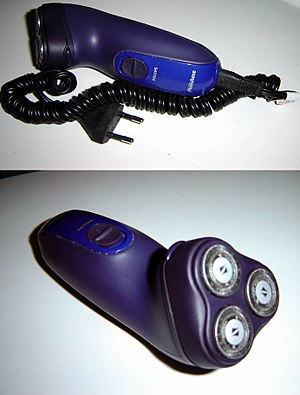 The electric razor was the next big step. With electric razors, shaving cream, soap or water is no longer needed. Electric razors use electricity to either make blades rotate or oscillate. That is the blades are either moved in circles, or they are moved up and down (or left and right). The razor is usually powered by a rechargeable battery. Prof. Alexandre Horowitz invented the concept of rotating blades which is still marketed as Philishave by Philips.

Shaving using any of the shaving methods (straight razor, safety razor, or electric razor) can have side-effects, including cuts, abrasions, and irritated skin. Razor bumps can also occur from removing ingrown hairs. To reduce the likelihood of cuts, abrasions, and irritated skin, people can use a fresh razor blade and prepare their faces by washing in hot, soapy water and then applying a shaving cream lather. There is a razor called Bump Fighter that is designed to reduce razor bumps and other side effects, but it uses special cartridges that are more expensive than standard double-edge razor blades.