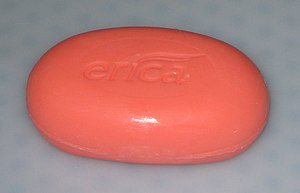 A bar of soap

Soap is a chemical compound resulting from the reaction of an alkali (commonly sodium or potassium hydroxide) with a fatty acid. Soaps are the metallic salts of long chain fatty acids. When mixed with water during bathing or washing, they help people and clothes get clean by lowering the chance of dirt and oil to get to the skin or fabric. Soaps are made from animal fats or vegetable oils. There are two basic steps in making soap. They are called Saponification and Salting-out of soap. Some people like to make their own soap.[1]

Soap cleans very well in soft water. It is not toxic to water life. It can be broken down by bacteria. However, it is slightly soluble in water, so it is not often used in washing machines. It does not work well in hard water. It cannot be used in strongly acidic solutions. Mild hand soaps are only basic enough to remove unwanted skin oils. For other forms of oil, dishwashing soap is strong enough to remove almost all forms of oil without damaging petroleum products such as plastics. It does not damage skin either.

Soap has been made in many ways. Humanity has used soap-like things for thousands of years. The earliest recorded evidence of the making of soap-like materials dates back to around 2800 BC in Ancient Babylon[2] and Sumeria.[3] They were soap solutions, or soapy water. People made them by mixing ashes with water and fat and boiling them.[3] The Babylonians used water, alkali and cassia to make soap.[4]

A recipe for solid soap appeared in about 800 c.e. Gauls added salt to the soap solution to make the solid soap fall out.[3]