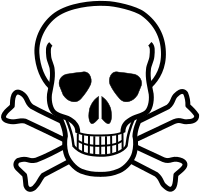 The skull and crossbones is a common symbol for toxicity

Toxicity is the degree to which a substance can damage an organism.[1] It is the subject-matter of toxicology.

A central idea in toxicology is that almost everything is toxic when taken to excess. Effects are dose-dependent: even water can lead to 'water intoxication' when taken in too much. For even a very toxic substance such as elapid snake venom there is a dose below which there is no toxic effect.

Toxicity is species-specific.[2] A dose which is toxic to one animal may not be toxic to another.

Acute toxicity is different from chronic toxicity. Chronic toxicity talks about the bad health effects from many exposures, often at lower levels, to a substance over a longer amount of time (months or years).

It is widely thought to be wrong to use humans as tests for acute (or chronic) toxicity research. However, some information can be picked up from investigating cases when humans accidentally make contact with the substance (e.g., factory accidents). Otherwise, most acute toxicity data comes from animal testing or, more recently, in vitro testing methods and inference from data on similar substances.[3][5]