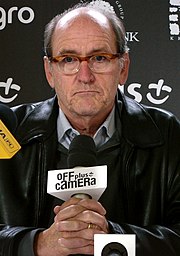 Richard Dale Jenkins (born May 4, 1947) is an American Academy Award-nominated television, stage, voice, and movie actor who has appeared in many movies such as; The Visitor, The Cabin in the Woods, Eddie, Fun with Dick and Jane, Blue Steel, Wolf, The Mod Squad, and has recently appeared in the 2012 movie Killing Them Softly. In television, he is known for his role in Six Feet Under.

Jenkins was born in DeKalb, Illinois on May 4, 1947.[1] Jenkins was educated at Illinois Wesleyan University. Jenkins is currently married to Sharon R. Friedrick since 1969, they have 2 children together. Jenkins currently lives in Cumberland, Rhode Island.

Help Improve This Page: Please contact us to become an approved KidzSearch editor and provide your credentials. Provide feedback on this article in our Richard Jenkins Forum