KidzSearch Safe Wikipedia for Kids.
Jump to: navigation, search
For the album by British electronica group Fluke, see Risotto (album).
Not to be confused with risoni. 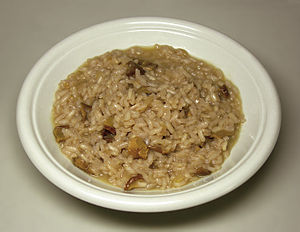 A dish of risi e bisi, a Venetian variant of risotto

Risotto (plural: risotti) is a typical Italian dish based on rice. Originally it comes from Piedmont, where rice is commonly grown. It is very important for the cuisine of Milan. Common ingredients of the base recipe are white wine, and onions.

Risotto is a class of Italian rice dishes cooked in broth to a creamy consistency. The broth may be meat-, fish-, or vegetable-based. Many types of risotto contain Parmesan cheese, butter, and onion. It is one of the most common ways of cooking rice in Italy.

Risotto is normally a primo (first course), served on its own before the main course, but risotto alla milanese is often served together with ossobuco alla milanese.

A high-starch (amylopectin), low-amylose round medium- or short-grain rice is usually used to make risotto. Such rices have the ability to absorb liquids and to release starch and so they are stickier than the long grain varieties.

The principal varieties used in Italy are Arborio, Baldo, Carnaroli, Maratelli, Padano, Roma, and Vialone Nano.[1] Carnaroli, Maratelli and Vialone Nano are considered to be the best (and most expensive) varieties, with different users preferring one over the other. They have slightly different properties. For example, Carnaroli is less likely than Vialone Nano to get overcooked, but the latter, being smaller, cooks faster and absorbs condiments better. Other varieties like Roma, Baldo, Ribe and Originario may be used but will not have the creaminess of the traditional dish. These varieties are considered better for soups and other non-risotto rice dishes and for making sweet rice desserts. Rice designations of Superfino, Semifino and Fino refer to the size and shape (specifically the length and the narrowness) of the grains, and not the quality.

There are many different risotto recipes with different ingredients, but they are all based on rice of an appropriate variety cooked in a standard procedure.

The rice is first cooked briefly in a soffritto of onion and butter or olive oil to coat each grain in a film of fat, this is called tostatura; white or red wine is added and has to be absorbed by the grains. When it has evaporated, the heat is raised to medium high and very hot stock is gradually added in small amounts while stirring gently, almost constantly: stirring loosens the starch molecules from the outside of the rice grains into the surrounding liquid, creating a smooth creamy-textured liquid. At that point it is taken off the heat for the mantecatura when diced cold butter and finely grated Parmigiano-Reggiano cheese are vigorously stirred in to make the texture as creamy and smooth as possible. It may be removed from the heat a few minutes earlier, and left to cook with its residual heat. Seafood risotti generally do not include cheese.

Properly cooked risotto is rich and creamy but still with some resistance or bite: al dente, and with separate grains. The traditional texture is fairly fluid, or all'onda ("wavy, or flowing in waves"). It is served on flat dishes and it should easily spread out but not have excess watery liquid around the perimeter. It must be eaten at once as it continues to cook in its own heat and can become too dry with the grains too soft.

Risotto can be made using many kinds of vegetable, meat, fish, seafood and legumes, and different types of wine and cheese may be used. There is even, exceptionally, an Italian strawberry risotto.

Many variations have their own names: