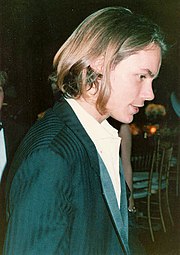 River Jude Phoenix (August 23, 1970 – October 31, 1993) was an American movie, television, stage, voice actor, musician, and activist who is known for his roles in The Thing Called Love, Indiana Jones and the Last Crusade, Dark Blood, My Own Private Idaho, and in Stand by Me. His brother was actor Joaquin Phoenix.

Phoenix was born on August 23, 1970 in Madras, Oregon to Arlyn Sharon Dunetz and to John Lee Botton. He was the oldest of four. Phoenix never married and had no children. Phoenix died on October 31, 1993 in West Hollywood, California from a drug overdose and heart failure, aged 23.[1]