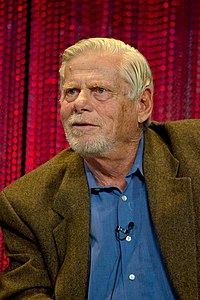 Robert Xavier Morse (born May 18, 1931) is an American movie, stage, television, radio, and voice actor. He is best known for his role in the musical and movie of How to Succeed in Business Without Really Trying. He is now known for his role as Bertram Cooper in Mad Men. He has won a Drama Desk Award, 2 Tony Awards, a Screen Actors Guild Award, and an Emmy Award.