Rockford is a town in Coosa County, Alabama, United States. At the 2010 census the population was 477. The town is the county seat of Coosa County. 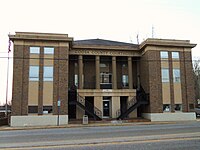 The Coosa County Courthouse is located in Rockford which is the county seat of Coosa County.

The old Coosa County Jailhouse is located in Rockford.

In 1993, a sick dog wandered into Rockford. The animal was called "Fred" and was nursed back to health by town residents. For the next ten years, Fred was the town mascot.

Fred gained popularity through a regular newspaper column, "A Dog's Life," about his activities and encounters. He was on a television show on cable TV's Animal Planet.

Fred died on December 23, 2002 in a Birmingham animal hospital, from a mysterious animal bite. He was buried behind the town's old jailhouse. A full-size grave marker, donated by a Montgomery businessman, was added in May, 2003. Fred was inducted into the Alabama Veterinary Medical Association Animal Hall of Fame in 2004.[2]