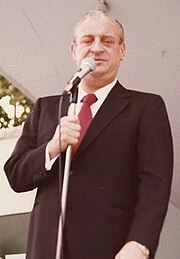 Rodney Dangerfield (Jacob Cohen, November 22, 1921 – October 5, 2004)[1] was an American comedian, movie, television, stage, radio, voice actor, writer, and singer. He was known for his catchphrase "I don't get no respect!" He was in the movies Easy Money, Caddyshack, and Back to School. He won a Grammy Award.