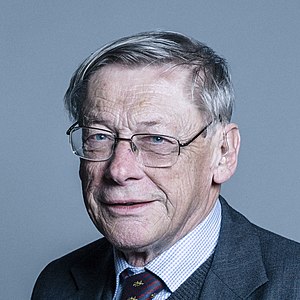 Roger Bootle-Wilbraham, 7th Baron Skelmersdale (2 April 1945 – 2 November 2018), was a British politician. He was a Conservative member of the House of Lords from 1974 until his death in 2018. He studied at Eton College. He worked with Prime Minister Margaret Thatcher.

Bootle-Wilbraham worked for Department of Environment as a Parliamentary Under Secretary of State and then to the Department of Health and Social Security in 1987 before that department was split in 1988.

Bootle-Wilbraham continued to work at the Department of Social Security until 1989 when he was assigned to the Northern Ireland Office until November 1990. He was not reappointed by John Major.